The Phenomena of Moisture in Transformer Oil

Water in oil appears as an unwanted substance, it is generally accepted that water in microscopic amounts - not gallons- is the cause of more electrical breakdowns than any other impurity. Moisture constitutes a hazard not only to the insulating qualities of the oil but also to the insulations that are immersed in the oil.


Water may be introduced to the oil by leaking gaskets, poor handling techniques or from the product of natural insulating paper and oil degradation. As the paper degrades, it produces Carbon Dioxide and Water and as the insulating oil ages, water, acids, sludge and other polar compounds are formed. So its presence is inevitable during the normal service life of a transformer.


Water is a polar liquid having a high permittivity or dielectric constant it is therefore attracted to areas of strong electric fields. This sees the internal moisture distributed not uniformly, but in fact potentially concentrating in the most dangerous parts of the system.


It is important to note that water is in a continuous state of movement between the oil and paper insulating system, caused by internal temperature variations due to load and ambient conditions.


Water may be present in four possible forms, they are:

• Free water – That is water that has settled out of the oil in a separate layer. It is this water which is indicated by a low dielectric breakdown voltage.

• Emulsified water – Or water that is suspended and has not yet settled out into free water (indicated by “caramel” coloured oil).

• Water in solution – or dissolved in the oil.

• Chemically bound water – Water which is chemically attached to the insulating paper and which is released when oxidized.


The destructive effects of water include:

• Expansion of the paper insulation, altering the mechanical pressure of the transformer clamping system.

• Increased corrosion of the core and tank


The most dangerous and destructive of these effects is the loss of the oils insulating ability. This may occur from the following events:

• During periods of high load and at high ambient temperatures, dielectric breakdowns can result from the reduced oil strength with high absolute amounts of water.

• With sudden high loads, water can boil off conductor surfaces and the vapour bubbles can cause dielectric failures as they rise to the top.


If oil is oxidized to any extent, any water coming into the transformer will partially be absorbed into the oil decay products (It is this fact which causes old or highly oxidised oil to dissolve more water than new oil). As the decay products build up in the oil, the surface tension of the water or the interfacial tension between the oil and the water is lowered dramatically. This heavier decay molecule will then recirculate throughout the entire transformer and will find its way into the paper insulation, or into areas of high electrical intensity thus reducing the insulation resistance. The water saturated oil decay molecule has a preference for the coolest part of the transformer (bottom and fins, leading to corrosion) and areas of highest electrical stress (leading to arcing).


It is thus easy to see the importance of maintaining low moisture levels within a transformer to ensure a long and trouble free service life.

With our vacuum transformer oil reclamation system(ZYD), you can remove moisture from transformer oil to ensure all oil being transferred to electrical equipment meets recognized standards. 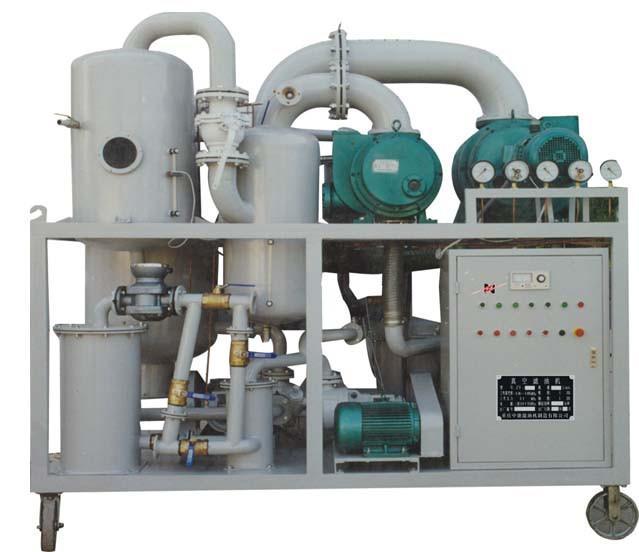